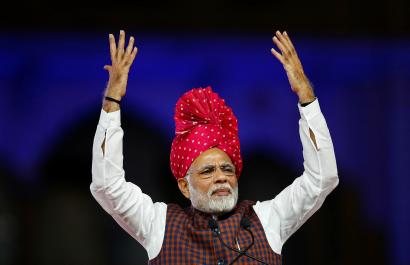 It is dubbed the world’s largest exercise in democracy. Indian elections have been underway for a few days now, and they will only conclude on May 19. More than 900 million Indians are eligible to vote, and expectations are that more than 500 million cast their ballots in this nation-wide poll. Nothing less than Narendra Modi’s political fate is at stake, as the election for the seats in India’s lower house of parliament is being viewed as a referendum on him as prime minister and his BJP party.

Simply put, it comes down to two issues. Modi has been campaigning on his achievements to improve national security and economic development, while his opponents have been busy pointing out that his hardline religious nationalism has worsened tensions between Hindus and Muslims. The assessment on success is no doubt a difficult one. How is it possible for any leader of a near 1.4 billion population to drive democratic change for the benefit of his people without breaking a few eggs?
In any case, the rest of the world may not care much about Indian elections, as it’s just too far away and too complicated to put one’s head around it. But in reality, it is probably one of the most important events in today’s geopolitics. This giant of a country is only awakening as we speak. It is located in one of the most strategic areas of the future, bordering on or within proximity to the Middle East, Pakistan, Central Asia, China, and SE Asia, and surrounded by a vast ocean crucial for shipping and world trade.
And right there, in the midst of all, is India that in 5 years is expected to surpass China, become the world’s most populated country and to hit somewhere around 1.6 billion people in the decades to come. In only another 5 years, India is expected to sport the second largest economy in the world. Considering this massive footprint in the making the Indian government’s politics cannot be ignored by anyone, as the ripple effects from Delhi are being and going to be felt globally.
Demographically, India is in a unique spot if you count out some of the African countries. It is the only sizeable jurisdiction on the planet where, on average, the population’s age is still declining. Many outside India have called it a demographic dividend, but increasingly people on the ground aren’t so sure any longer and rather fear a demographic liability. Millions of young people, many well educated, are released into a job market that might not be able to absorb the new supply.
It is for good reasons that Modi held a total of four informal and formal meetings with Xi Jinping last year. Despite historical tensions between India and China they share a symbiotic and existential destiny. China needs India to fulfill its dream of Belt and Road as the sub-Continent is an incremental part of its implementation. And India needs China to heavily invest and create a generational economic platform accommodating its army of job seekers. Underneath the surface, Modi and Xi have been embracing each other.
In other words, Beijing could not be more interested in the continuity of the current government but would not dare to openly influence the democratic process. Others don’t seem to be so reluctant. On Friday, one day into the election process, no other than Vladimir Putin outright endorsed Modi by awarding Russia’s highest order to the Indian prime minister as the first leader from the democratic world. Modi, in turn, wasn’t shy to effusively express his gratitude, for the award and the apparent support.
There is no doubt that Modi deserves such honour. As India’s leader, he has always kept it with the decade-long tradition of endorsing his country’s relationship with Russia. Let’s not forget that India has become one of the world’s largest arms importers, spending in excess of 100 billion annually, and Modi has evidently boosted Delhi’s defence ties with Moscow. For example, he went out on a limb and risked America’s wrath by steering a 6 billion dollar purchase of the S-400 missile defence system.
Washington has threatened sanctions over this transaction, but Modi remained undeterred. There was an informal meeting between Modi and Putin in Sochi last year that seemed to have elevated relations to a new level and firmed up Russia’s position as India’s top arms supplier. Again, this is existential for either party, as such arms deals are deemed to be highly lucrative and provide Russia with a much-needed source of income that could well compensate for any US sanction hardship.
The trade goes both ways, and this carefully timed diplomatic and symbolic move is an opportunity for Putin to reciprocate. While it may be most rational from a geopolitical perspective, Putin’s action is indeed a blatant departure of Russia’s tradition of staying above India’s electoral politics and dealing with established governments. He is taking a risk of great proportions, particularly at a point when Russian meddling in foreign elections is frowned upon. And what if Modi doesn’t make the race?
In any case, India, or should we say Modi, is actively courted these days, from all ends, and for good reasons. Moscow and Beijing have certainly understood the importance of the country and are, in different shapes and forms, actively engaging with the prime minister. Washington also has a sense and tries to put the relationship on a new footing, but the current White House somehow continuously gets it wrong to put arms around their Indian counterparts. Riyadh is doing everything to inject itself into the Pakistan-India conflict and probably play a US agent role of sorts. Tehran commands its own approach with Delhi and, to be fair, hasn’t been unsuccessful.
Modi has clearly spread India’s wings broadly and been careful not to make his country dependent on one power in the world. On the contrary, he is relentlessly working on India being one of those powers in its own right.
Back to archive